This  Japanese Folktale was one I found while on my travels in Hong Kong many years ago. It made so much sense to me, particularly as I felt that my overseas clients and workshop participants really understood what I offered, yet many people at home did not.

Recently I was reminded of this beautiful Japanese Folktale. I was facilitating one of our ‘Seven Weekend of the Soul’ Experiences in the gorgeous Liss Ard Estate. We were talking about how important it is to go out and find our ‘tribe’ – to discover people who resonate with us, who share our common interests/beliefs/likenesses. As when we do, we are truly nurtured at the deepest level of our heart and soul.

Here is the tale:

“There once was a man who had a huge hideous growth on his face. Fearful of ridicule and rejection, he avoided everyone in the village and spent a miserable, impoverished life as a maker of charcoal. Each day he’d go into the woods and gather sticks, bringing them home, and burn them into charcoal, from which he and his wife eked a meagre living.

One day, while gathering his sticks, a terrible thunderstorm appeared out of nowhere. The man dashed for shelter inside the hollow of a large old tree. When the storm finally passed, it was night.

Just as he was about to venture into the night, he heard some very strange sounds. Right in front of his eyes was a bizarre gathering of hobgoblins, dwarves, and other mutated creatures. Some had three legs; others had eyes dangling from their heads on stems. These creatures were various colours, some were furry, all were unquestionably hideous from the ordinary human point of view.

It was a party and soon drumming and dancing ensued. The charcoal burner watched in delight as the music got stronger, louder and the hobgoblins danced. His feet started to itch to join them. But he was afraid they might devour him. He stood in the tree hollow, listening to the music, until he couldn’t bear it any more. 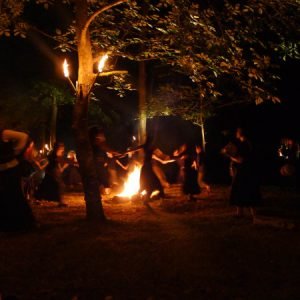 He burst out of the tree hollow and began to dance. He was brilliant. The hobgoblins all stared in admiration as the charcoal burner flipped and twirled, basically stealing the show. When the dance was over, the creatures begged him to return the following evening; they had never seen such a talented human. They demanded a pledge for his return.

To them, his unsightly tumour was an incredible asset. They insisted he leave it behind to ensure his return! Suddenly the growth was gone. He ran home, the happiest man in the world. But even better the bottom of his charcoal basket was filled with gold.

The charcoal burner became the wealthiest man in the village. By letting go of his fear of rejection, he had discovered his true currency: his talent for dancing.”

And he learned that even his tumour had value – for the right audience.

I hope you enjoyed this Japanese Folktale too! Until next time…

Quote:
“Dancing…
is like dreaming with your feet”
Constanze